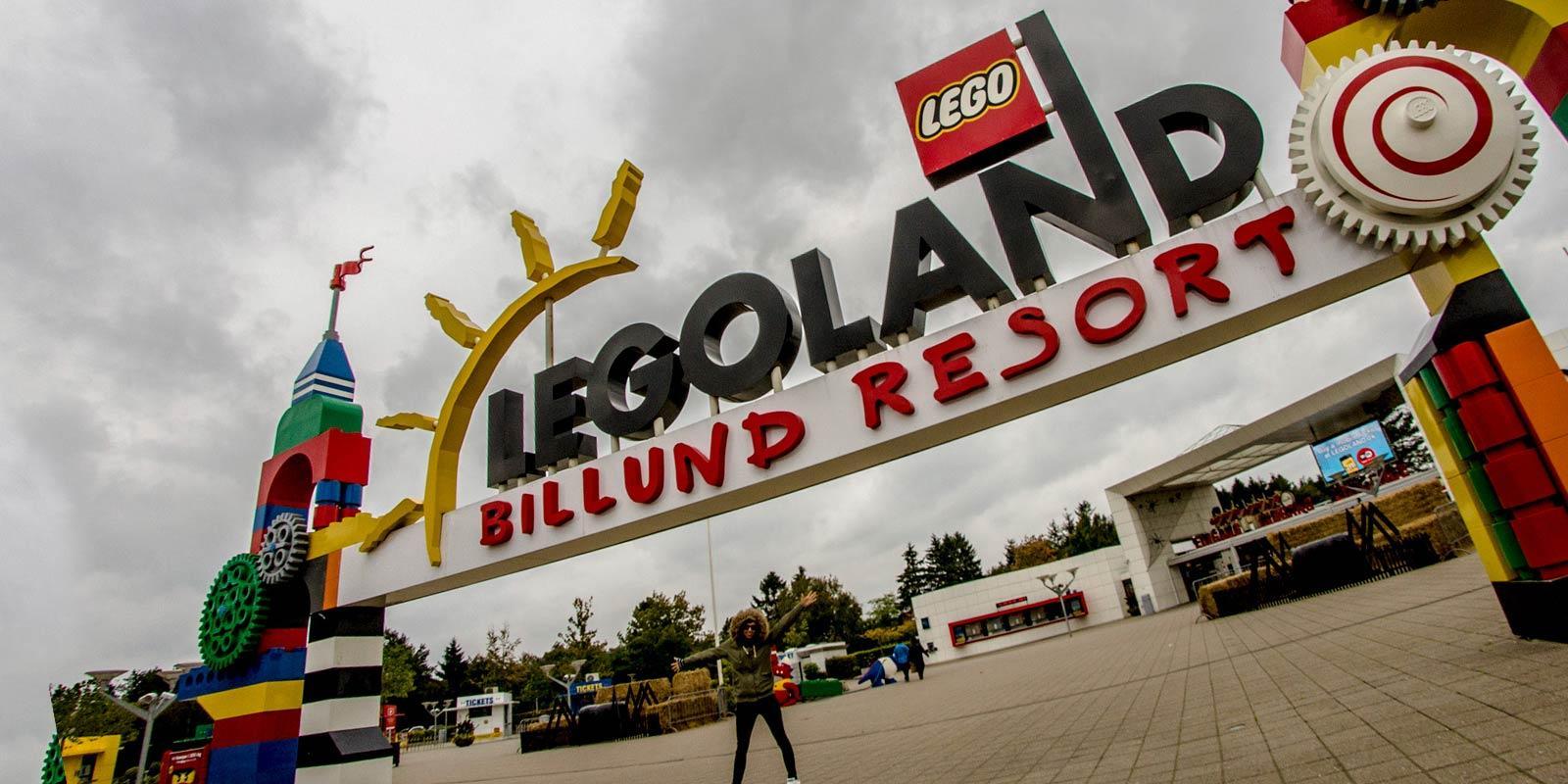 By Sean O'BrienMarch 25th, 2017Europe, Things to Do, Travel
No Comments

The small quiet town of Billund on the western stretch of Denmark is home to the world’s most famous toy company, Lego and also home to the first Legoland Tourist Park. The drive up from Germany (it’s only 1.5 hours from the border) takes you through scarce farming lands and tiny roads, we almost thought the navigator was taking us on a wild goose chase! Eventually we entered the town of Billund and saw the enormous Lego factories, where, since 1952 Lego bricks have been produced.

As you leave the car park and step across the road you are greeted by the famous Lego gates of Legoland Billund; stop to pause for a photo. The entrance price to the park isn’t too bad (329 DKK / $50 USD) and if you go in October like we did there is barely anyone there so you can get on any ride inside a 3-5 minute wait. As you enter the gates you arrive right in Miniland, which is a series of miniature landscapes and cityscapes of famous places around the world. The White House, Abu Simbel temple in Egypt, Amsterdam canals, Dutch windmills, downtown Copenhagen, offshore oil rigs from Norway, Hollywood Boulevard, NASA Kennedy Space Station, Changi Airport in Singapore… just to name a few.

There’s apparently over 60 million Lego bricks used to build all the installations in the park and it’s quite a sight to see. Unfortunately, it rains A LOT in Denmark and the west coast seems to catch all the storms from the North Sea so the bricks are looking all pretty faded and tired. In all honesty there doesn’t appear to be anything that’s been built in the past 15 years in Miniland which I can understand as it’s quite a project to build a 3m high elephant out of tiny bricks but then again if you’re pulling in millions of Kroner’s in entrance fees to the park maybe you could shell out on something new; we are talking about one of the most popular toys on planet earth.

Star Wars is a major theme at Legoland, especially with the buzz of Episode VII coming out later this year and the enormous popularity of the Star Wars kits (Agata’s little nephew hasn’t even seen a Star Wars film but is obsessed with Star Wars Lego!). There’s a life sized Darth Vader statue at the entrance to the Star Wars exhibit which includes a life sized Rebel X-Fighter plane (15m long) inside the pavillion. Arrgggh there’s just so many awesome Lego buildings to see in Miniland we ended up taking hundreds of photos!

Let’s be honest, Legoland is pretty targeted to younger kids. Whilst there’s a few rollercoasters that can get the heart-rate up most of the rides are pretty tame. Highlights are the 2 larger rollercoasters and you can’t really go to the park without going on the Viking River Splash (tube ride). Inside the Knight’s Kingdom castle there is a mirror-maze which is surprisingly pretty legit and I don’t recommend running through it was full of terrified children running around trying to find their way out.

You could easily say that Star Wars lego is the biggest attraction at the park but one of my favourite installations is the NASA space exhibit featuring a scaled replica of the launchpad at the Kennedy Space Center in Florida, USA as well as a model of the centre itself. I’ve been to the real KSC in Florida before and I’m of course a huge space buff so it was interesting to see this particular lego installation which includes models of all the various NASA rockets just like at KSC.

At the end of the park is one of the most amazing Lego stores on the planet. Every single kit you’ve never seen or heard of before (did you realise Lego makes Ghostbusters and ‘Big Bang Theory’ kits???). There’s areas where you can free play and build with thousands of Lego bricks as well as sort through all the various kits imaginable. There’s also provision to buy individual bricks in different colours and styles so you can add to your vast collection. We managed to get out of there with only a small few Star Wars kits – thanks a God!

Here’s some of the best Lego kits we found at Legoland. Not going to lie, Lego is NOT cheap anymore, but it’s still the most fascinating toy in the world.

Legoland Billund in Denmark, the home of Lego, is looking a bit tired by now. That being said it still captures the imagination and it’s somewhere you need to visit at least once in your life. We would recommend going out of season so you can get through the park a bit quicker and not have to wait for the rides; I think it might be a little disappointing to stand in the queue for 2 hours to go on a rollercoaster here; it’s not Ferrari World Abu Dhabi style.