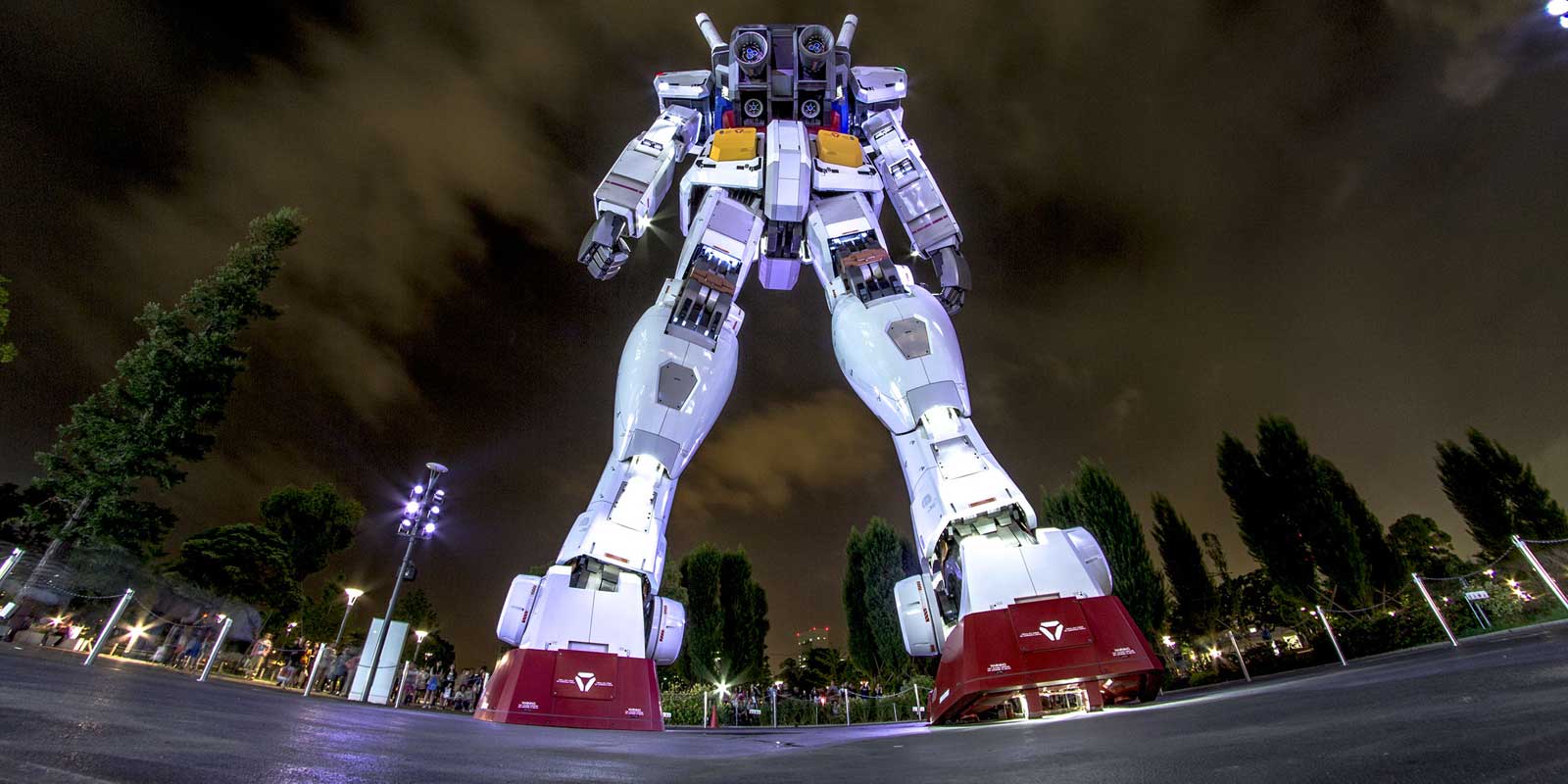 One of my favourite aspects of Tokyo life to visit is the bustling and somewhat crazy manga/anime scene. Manga, being the typically black and white Japanese cartoon comic books and anime being the ‘animation’ of these in to television series or films (famous anime includes Dragonball Z, Astro Boy, Pokemon etc). Japanese culture seems to thrive on the cartoon themes with so many manga style restaurants, signage, art and fashion around the country. It’s hard to mistake you’re in Japan when you see Shinkansen (high speed commuter trains) adverts with the trains drawn as Transformer toys!

On our most recent visit in Tokyo, I took Agata on a tour of my most favourite spots for manga around Tokyo; and there are many! Below are my recommendations of Tokyo’s Top 5 places to visit for Manga and Anime enthusiasts!

One of my favourite anime series is Mobile Suit: Gundam. It’s actually a pretty old cartoon from 1979, however I was only introduced to it in the 1990’s where one of the spin-off series (Gundam Wing) came to Australia. The show fits around the plot of human colonies fighting each other on both earth and space, with one colony having this special weaponised robot (Gundam) called a ‘Mobile Suit’ which is piloted like a plane by a human. The show has been broadcast for close to 40 years in Japan and became so popular they made a 40m high life-sized statue of the mobile suit in the centre of town.

It’s actually pretty impressive! When you walk up to it you can see closely all the mechanical joints and engineering specifications written on the parts, as if it is really a real suit, just waiting to be turned on when the aliens invade us.

Even if you aren’t a Gundam fan, you should go and check out this statue. It’s great during the day as it’s next door to a large shopping centre and a nice part of Tokyo called Diver City, which has the large Tokyo Ferris Wheel and park areas surrounding. Right next to the statue is the Gundam cafe where you can get Gundam topped coffees and plenty of memorabilia. You can find the statue here:

Mandarake is the biggest store for manga and anime lovers. Although they have plenty of locations around Japan, my favourite one to visit is the underground cave store in Shibuya. It can be a little tricky to find as Google Maps doesn’t get the place right exactly, but if you can find this particular staircase entrance (see photo above) that I am walking out of that is the entrance. You go down a staircase about 5 levels down in to a cave which is jammed packed with all kinds of manga and anime. Mandarake’s main specialty is doujinshi, which is manga drawn by amateurs but based on official series. There is also a large romance themed section which attracts many Japanese women of all ages. Aside from the comic books, art and collector’s cards, Mandarake has an eclectic collection of vintage anime toys and dolls, everything from early 1980’s Astro Boy dolls, to original Transformers and Gundam Wing still in their plastic.

You could easily spend hours going through the collections in this store and it’s something you shouldn’t miss when visiting Tokyo even if you aren’t an anime fan (I mean, you’re going to be visiting Shibuya already, right?).

Akihabara is a district in Tokyo that has become a pop culture mecca with a large concentration of stores specialising in manga, anime and even Japanese electronics. There are 5 streets in one area that you can head to and walk around to find all sorts of manga and anime merchandise, comics and films, from the mainstream all the way down to the dark and perverse. Akihabara is also the birthplace of the Otaku culture, which is the devoted anime fans (both men and women) who like to dress up as their favourite characters, with many restaurants in the area inviting the Otakus or having their workers dress in costume themselves.

It’s very easy to get to Akihabara by train and it’s a pleasant area to walk around even if you didn’t want to spend time digging through all the anime stores nearby.

The Tokyo Anime Center is also in the Akihabara area. It can be a little tricky to find as it’s actually up on Level 4 of a shopping centre building complex which isn’t immediately obvious from the street (just head up the big escalator when you find it on Google maps). It’s basically an institute that has set up a little art gallery for anime which has various artworks on display from famous Japanese anime artists. The place is a little hit and miss as it depends whether there is an interesting exhibition happening the particular day you visit; when I was there, the exhibit wasn’t something I was interested in so the experience wasn’t too exciting; that being said it’s still worth checking out if you are already in the Akihabara area.

The name literally means ‘Godzilla Store’, and Gojira-ya is one of Tokyo’s oldest toy collection shops. You can find everything Godzilla here, as well as other Japanese anime and manga related goods including stuff from Ultraman and Astro Boy. To be honest, the place is small and dinky and the glass cabinets could do with a bit of a clean, but that actually adds to the appeal of the place. It kinda has the feeling of walking in to an Otaku’s bedroom, with plenty of action figurine boxes stacked on the floor. There is even a Godzilla (say it without the ‘l’s) themed bar downstairs where you can watch the original show while downing cocktails.

How To Get Your 100kg of Sports Gear on the Plane (and more travel tips!)