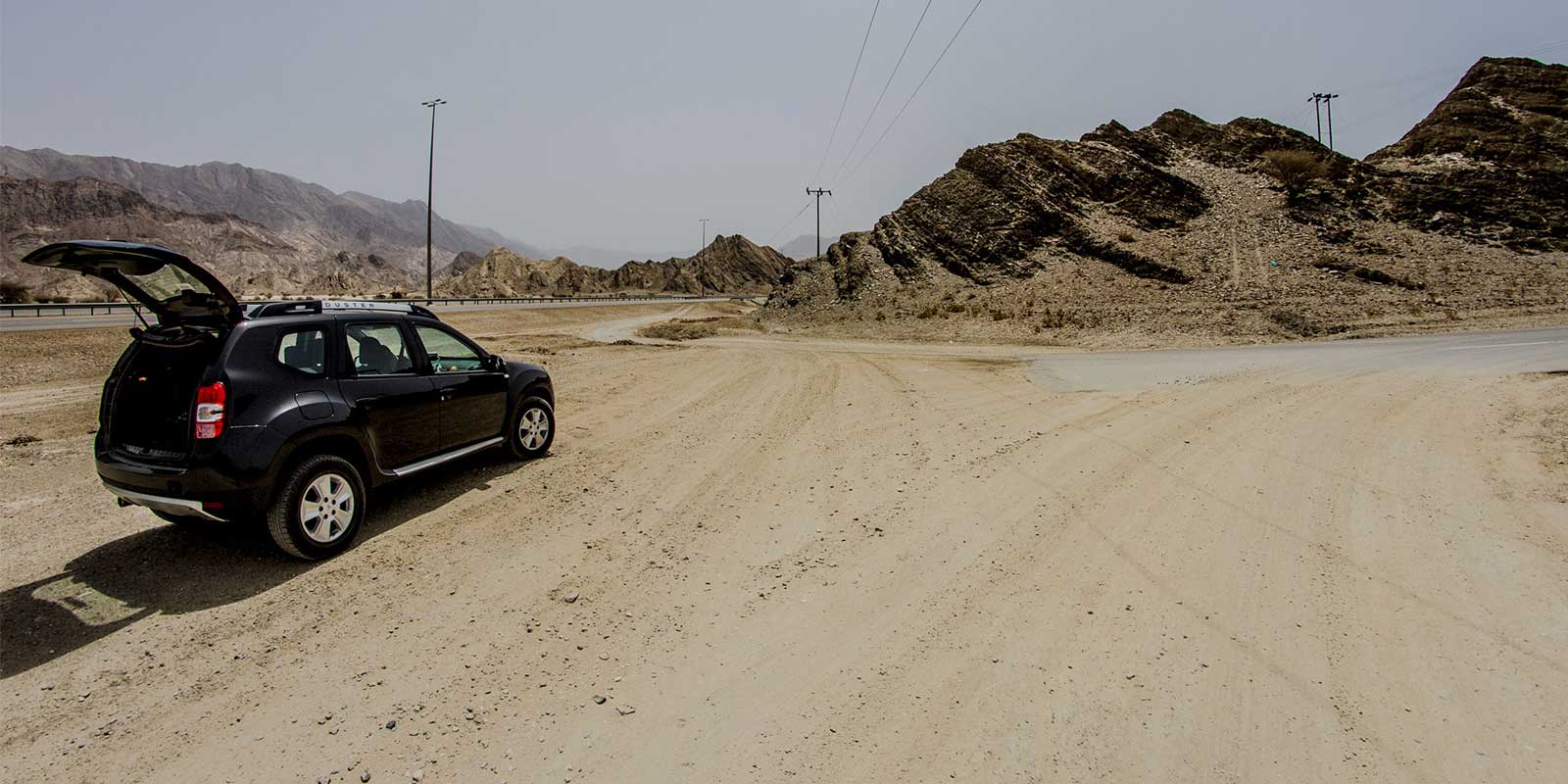 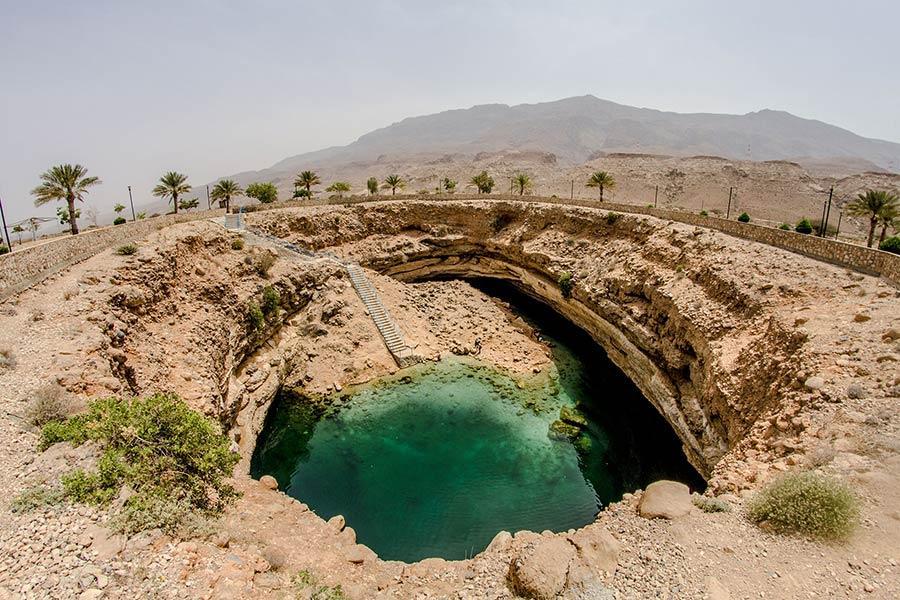 With Agata working in Dubai we decided to use one of our free weekends there to make a roadtrip next door in to Oman. It’s a pretty unknown place to us both, but I had heard stories of some legendary windsurfing conditions in the south on Masirah Island in the summer. However, with no windsurfing gear with me in the middle east it was to only be a roadtrip.

We were a little pressed for time with Agata flying in from work late in evening before the weekend and I meeting her at the airport to rent a car with special insurance to cross the border in to Oman. All rentals have unlimited km’s in the UAE and fuel is around USD 50c a litre so the vast distances of Oman were destined to be no problem for us. Anticipating no internet across the border we literally spent the 1.5 hour drive out of Dubai, through Sharjah then the bottom of Abu Dhabi (Al Ain) googling our options for a weekend getaway in Oman. 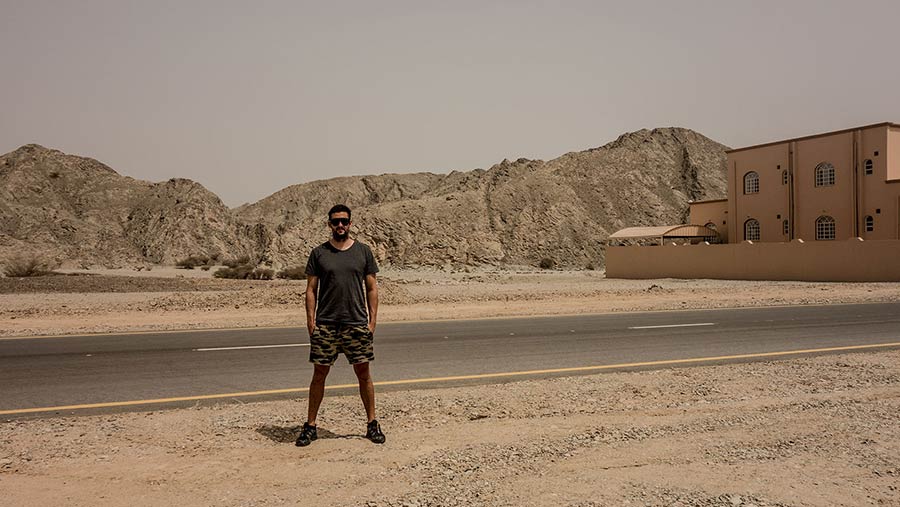 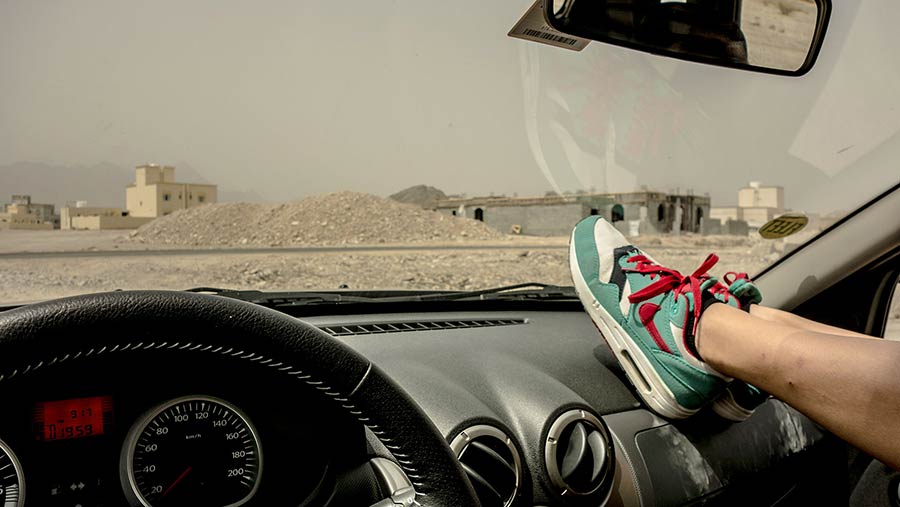 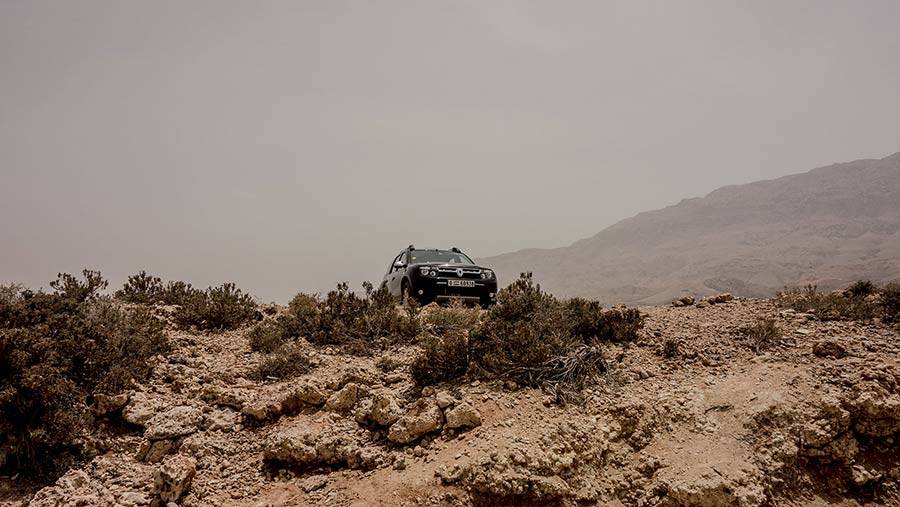 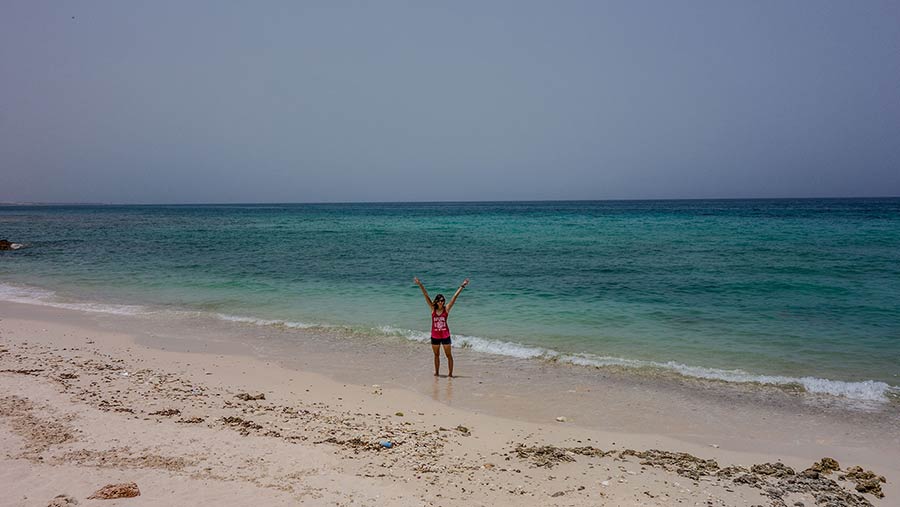 Heading to TripAdvisor as a first, we made a shortlist of things and places to see marked on a map, eventually working out we’d like to visit Muscat (the capital) and drive as far south as the Bimmah Sinkhole, which is roughly 5.5 hours from Dubai by highway. We’ve seen a few too many forts in the UAE so we decided to skip the famous fort in Nizwa and keep along the coast road, where an extraordinary highway pierces the rocky mountains of the Oman coastline, lit up the entire length, marking the route to Mecca, for those pilgrims who like to drive, rather than fly (or walk!).

Right before crossing the Oman border and losing our Dubai (Du Network pre-paid sim) internet, we booked a small apartment in Muscat for the night. We wrote down the address and screenshotted the street and directions thinking we would be ok as Muscat isn’t a particularly large city; we couldn’t have been more wrong! We were doing ok, until we arrived at the street number 1 below ours, assuming the next street would be the apartment – NOPE! Oman has really fucking unorganised street numbering, which is not in numerical order and doesn’t seem to follow any logic – even the locals complain! The street numbers seemed to jump up 200 at a time, in either odd or even jumps, regardless of direction. Then the building numbers on the street could have odd and even numbers on the same side of the road, or be numbering buildings behind other buildings which you couldn’t see from the road! 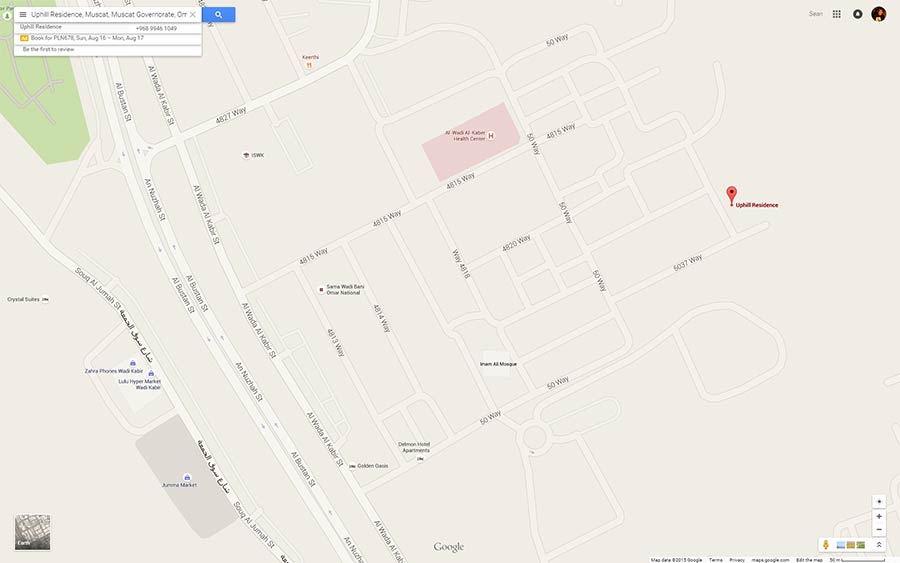 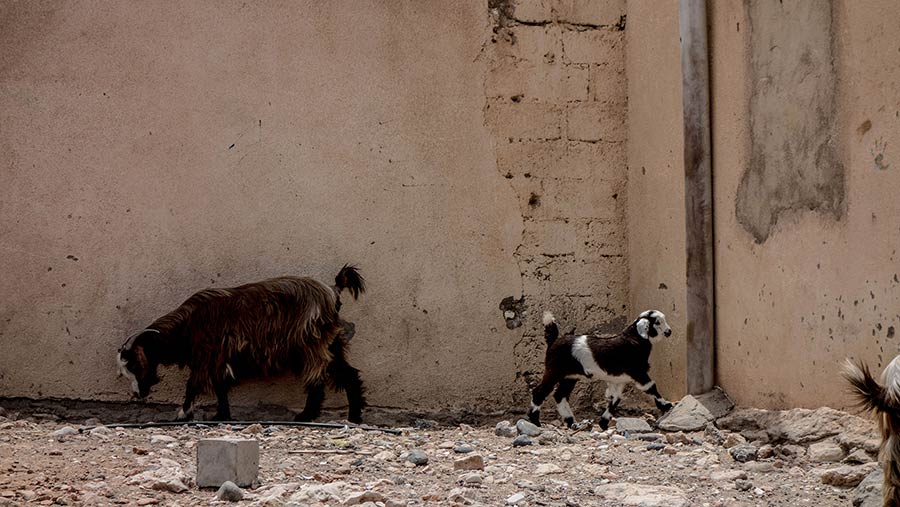 After a recharge in Muscat overnight, we continued the drive the next morning to the Bimmah Sinkhole which is around 2 hours drive (longer than Google Maps suggests) further down the coast from Muscat. Oman is pretty remote outside of the cities, and the Sinkhole is no exception. Apart from 3 goats on the side of the road we were the only people at the Sinkhole which made it an exceptional experience when we went a dip in the cool green waters. That being said, perhaps it’s not worth the 7 hour drive from Dubai as there is literally nothing else within 100km. 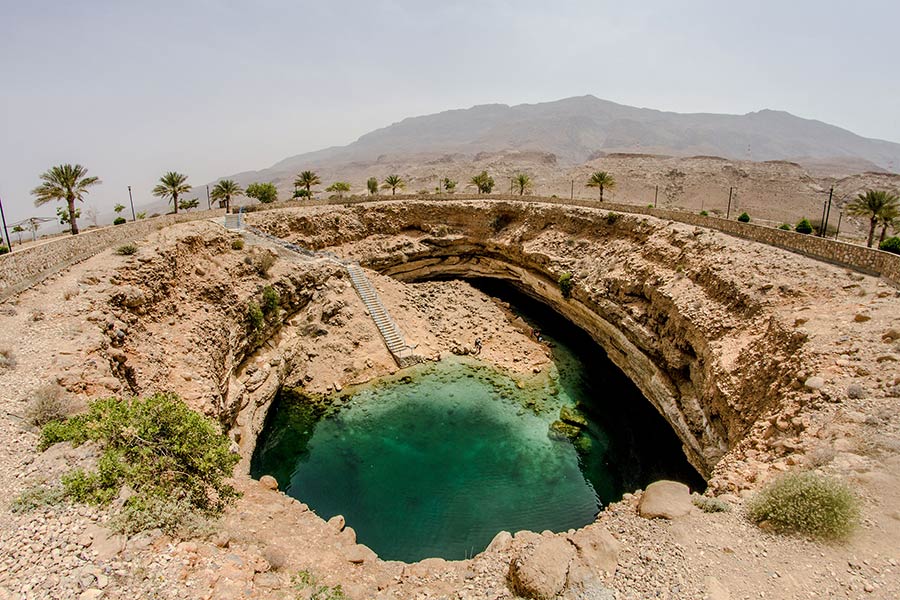 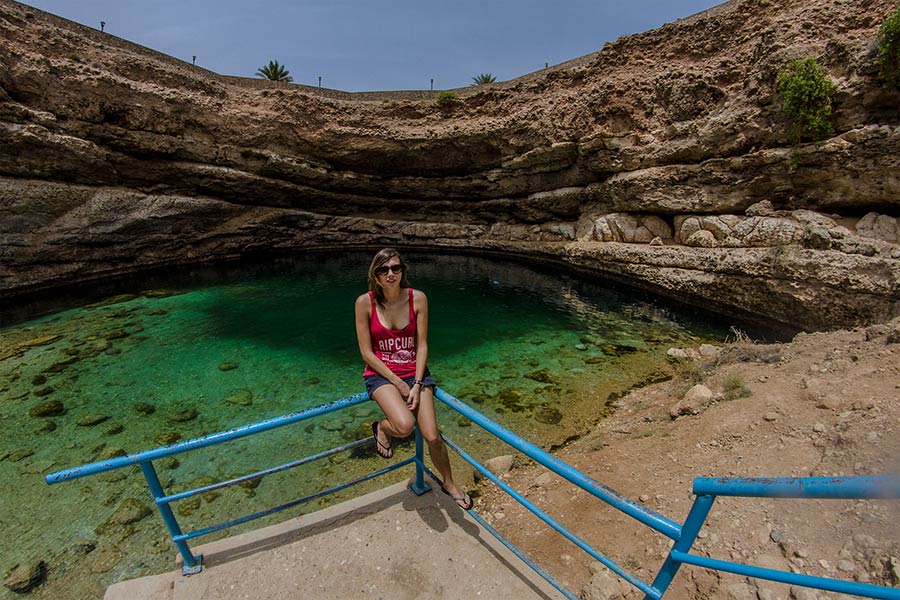 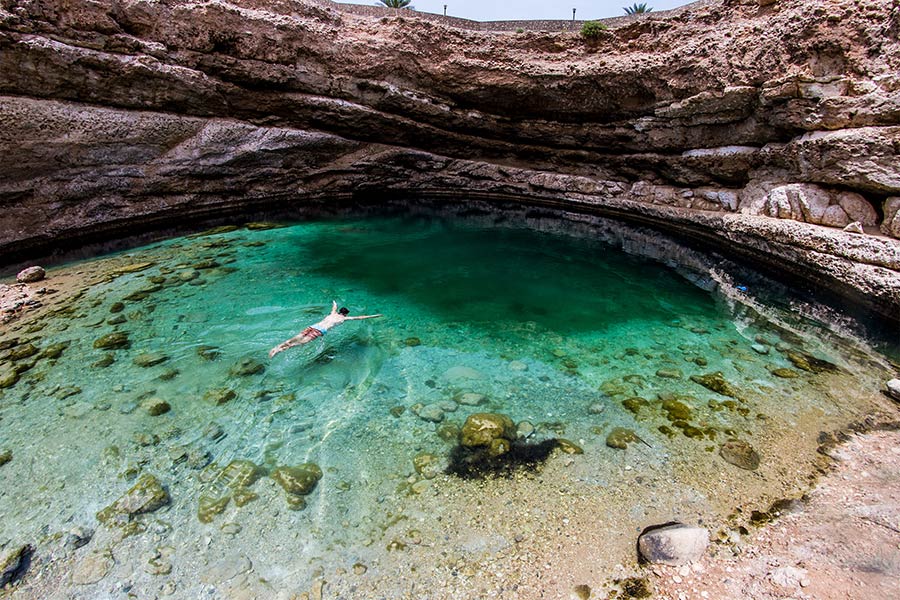 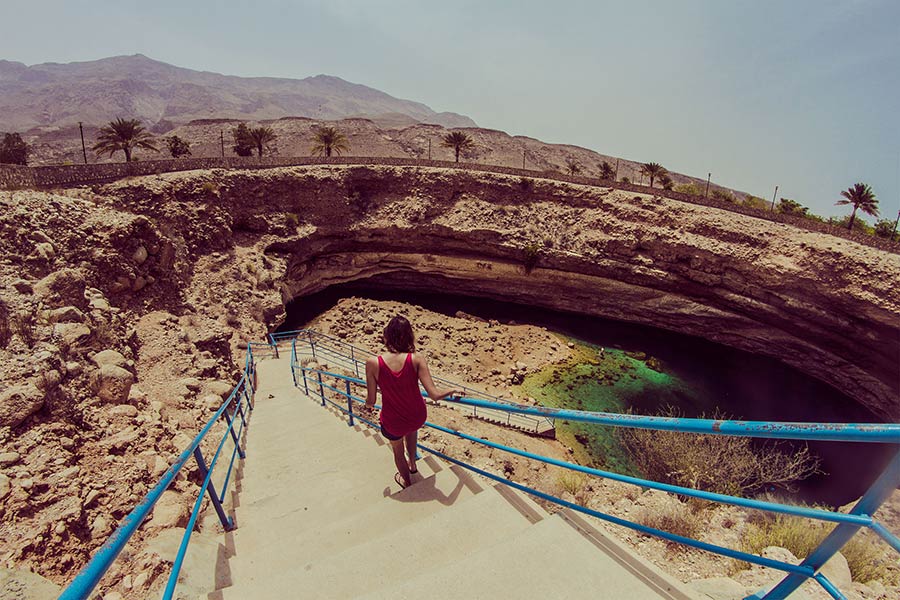 On the way back from the Sinkhole we re-visited Muscat to explore the Sultan Qaboos Grand Mosque. It’s probably one of the most iconic Mosque’s in the Middle East and is home to the world’s second largest hand-woven carpet and chandelier and is capable of holding 20,000 worshippers at once. If you are in Oman it’s a must-see as the building is simply spectacular. That being said, there wasn’t a huge amount of other interesting things to do in Muscat so after the Mosque we headed back west to the UAE. 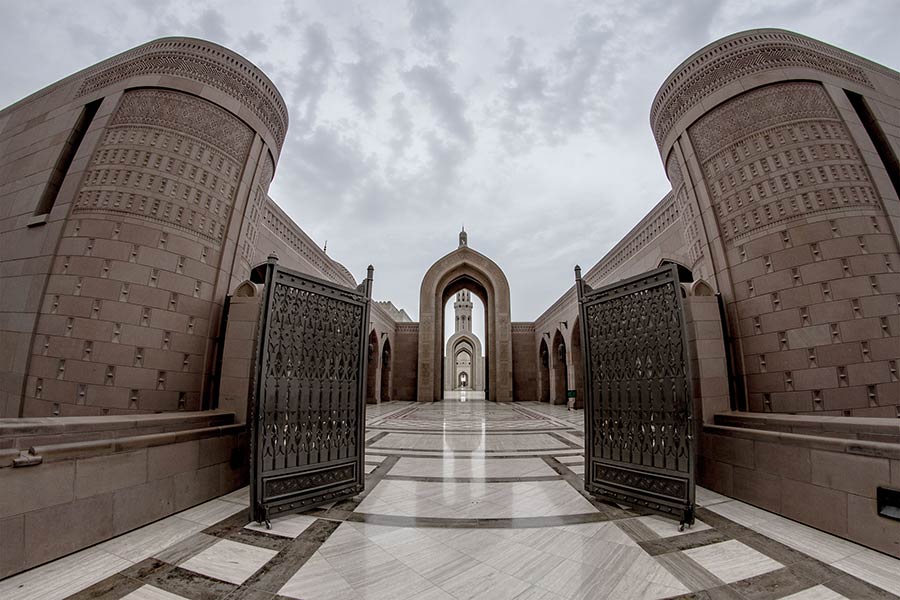 As to the challenges we met on exploring Oman, it seemed relatively easy to enter the country by car, but more complex to get out. To cross the UAE border we had to show our rental car documents to allow us to leave the country, we made an exit payment in UAE, followed by a small visa fee on entry in to Oman. This seemed relatively straightforward however on the trip home, we were surprised to have reached the UAE border, without getting the exit stamp from the Oman side, which resulted in us having to walk back the 600m in the barb-wire fenced off area between the two borders of these countries, in the middle of night, to get this exit stamp. We felt like we were illegally making a run over the border, as policemen watched us with torches as we trekked through the night. Eventually we were on our way back home to Dubai.

Oman has some of the friendliest people we’ve met in our travels; everyone speaks English so it’s easy to get around without knowing any Arabic. In the times we were lost, and wound a car window to ask a local for directions, we were met with smiles and detailed directions to keep us on the right track. Oman is no Dubai, but it’s still an interesting part of the Middle East to explore. 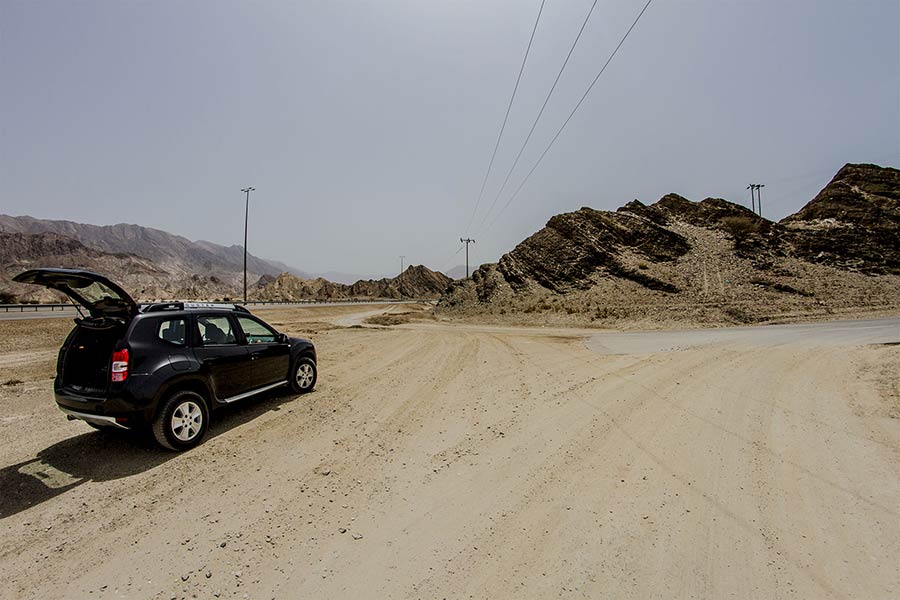 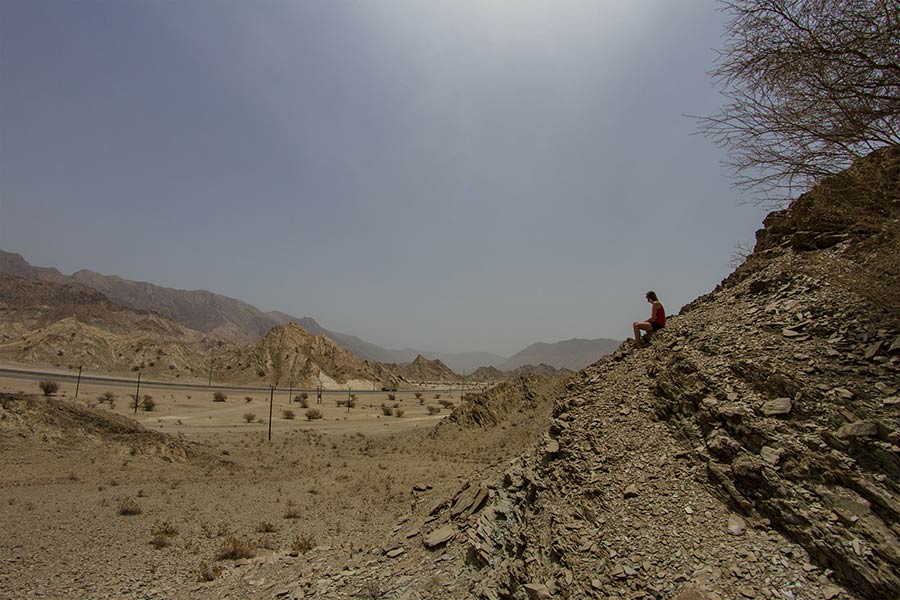 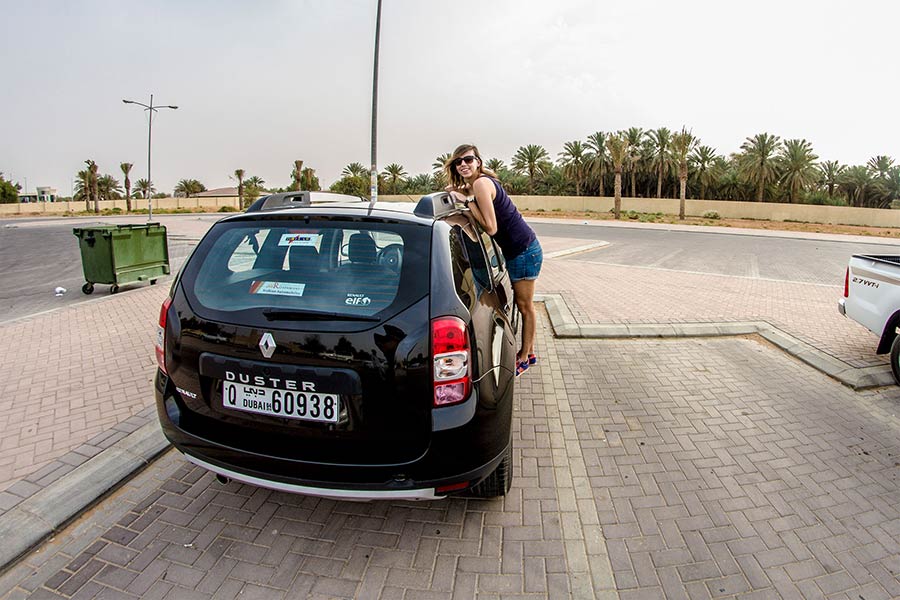