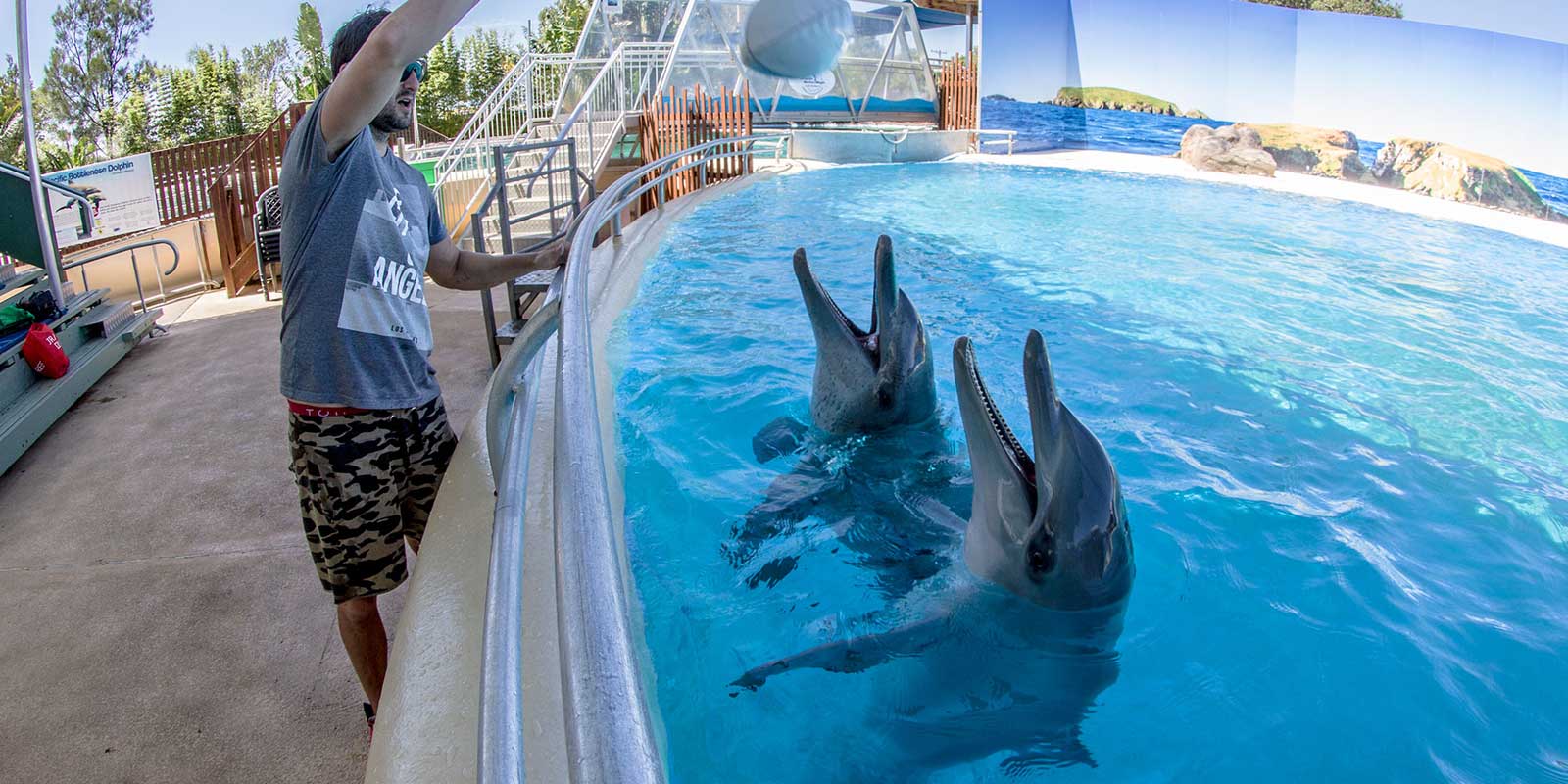 If you are ever roadtripping down the east coast of Australia make sure you make the stop in Coffs Harbour. Only 4.5 hours drive south from Brisbane, Coffs is one of the bigger towns on the Pacific Highway travelling from Brisbane to Sydney and it’s also home to another one of Australia’s ‘Big Things’ – the Big Banana. Coffs Harbour happens to also be the home of Dolphin Marine Magic, one of the best places in Australia to swim with the dolphins and encounter many more of Australia’s famous marine animals.

On our trip to Coffs Harbour we signed up for the Ultimate Dolphin Experience which included a private deep water swim with a dolphin. Typically it’s done in groups of up to 4 people however I was lucky enough to be the only one in the water that day!

The day starts with the highly interactive marine show which showcases the amazing abilities of the park’s seals and dolphins. During the show the audience can not only feed the seals, but also receive a ‘kiss’ from a seal and dolphin as you line up against the pool. The dolphins take over the show with a range of specialised tricks including playing a game of water polo with footballs and basketballs, racing each other around the pool in sequence and crazy jumps and flips all to the trainer’s beat. After the show, it’s worth it to hang around at the pool after everyone has left as the dolphins LOVE playing and we managed to stand at the pool’s edge to throw balls to the 3 park dolphins who never seemed to get bored of the ball games!

The ultimate experience begins after the marine show, in a separate pool next door to the show pool. Our dolphin today is Bella, a 10-year old Indo-Pacific Bottlenose dolphin. The experience lasts only 20 minutes, but every moment is action packed and worth every penny. I begin with a short meet & greet of Bella with the dolphin trainer, who explains a little about her history and anatomy. During this, Bella plays around allowing me to pet and cuddle her in the shallow waters.

Next we head in to the deep water for proper dolphin hugs and spins, where Bella would propel me across the pool pushing against my feet, or allow me to swim while I hold her chest. We go through a few games like ring throwing as she is well trained to bring the rings you throw straight back to you on her nose. All through the experience Bella seems genuinely keen to interact and happy; you get the sense she likes to play these games over and over again.

There’s only 2 shows per day, so a dolphin like Bella would only get around an hour of human interaction a day, which is part of their enrichment program – but you got the impression she was actually really enjoying the interaction with humans.

Swimming with the dolphins is an amazing once-in-a-lifetime experience. Their skin is like a smooth, glazed rubber, but they are so hyper intelligent you get the impression of connection with the animal even after only a few minutes. Bella was so well trained she would communicate or swim to the trainer’s command and the overall experience was really great. I would highly recommend the experience if you are visiting Coffs Harbour and like dolphins (bleh… like WHO DOESN’T LIKE DOLPHINS?)

Check out the rest of the fun things to do in Coffs Harbour after you’ve visited the dolphins.